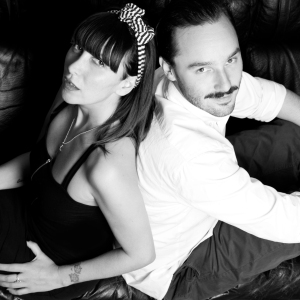 The Jaydes are based in Berlin and are compromised of two friends and studio partners Bloody Mary & Attan.
Their first remix of Anaxander’s EP “7 Ways“ on Dame-Music was a good introduction to announce their collaboration in July 2013.
In October 2013 the track “Step On Light“ (Dame-Music 022) was released as a single sided vinyl to present their forthcoming album self-titled The Jaydes.
The LP “The Jaydes” out the 10th of February 2014 Is a nine track journey through the history of house and techno, informed by the duo’s experiences growing up in those scenes during the ’80’s and ’90’s. Using vintage analog gear, The Jaydes make modern music with dated technology. Featuring numerous collaborators as well two vocal tracks performed by Bloody Mary herself, the skills of Mary and Attan perfectly balance power and sweetness to deliver versatile dancefloor bombs.
The album has been warmly acclaimed by the worldwide press with strong features on DJ Mag, Mixmag, Attack Magazine, Ibiza Voice and many more…
“Area 89” is the first Ep of remix release due in March 2014 made by one of the house music true pioneer Mr. Boo Williams. In the same month they also started their world live tour.
The second edition of remix on Dame-Music, due for June 2014, will include four exclusive versions of the track “Tears & Fears” made by David K, Heartthrob and Francis Harris.
Tight music, tight beat and tight friends, that is what to expect from The Jaydes.